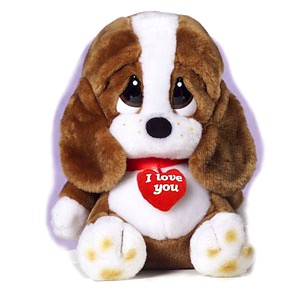 I went to the podiatrist today (about which more in a second). When I returned home, the fellow pictured above was sitting on my front porch. My lovely wife sent him to me! It's funny, she made me promise once never to send her a fuzzy bear or anything like that, but put a continent and an ocean between us, and we'll do ANYTHING to let each other know we miss them! If you squeeze the doggy, it sez "I love you!"

Foot update for Robin: put Lotrimin on for six months, trim nails straight across, hope for the best. He trimmed down the right toenail pretty severely, and said maybe down the road we'd do more serious excavation, but for now it's OK. Was kinda scary at first ... I go into the office, they put me in a chair that reclined, took off my shoes and socks, and prepared me for a local anesthetic! But then the doctor looked at it and said that wasn't necessary. Whew!

Recently, the News Hour with Jim Lehrer ran a segment on part-time college teachers, people like me, although of course, for this academic year I am actually working full-time (for the first and thus far only time in my 15 or so years in academia). The transcript is here, although the streaming video version is even better. Anyway, as is often the case, some of the biggest loads of crap come from UC Berkeley Chancellor Robert Berdahl. First, he tries to argue that part-timers are hired not because they come cheaper than tenure-track faculty (we make less per hour, we have fewer or no benefits ... in fact, for some of us, the first effect you notice about getting your doctorate is that your pay as a lecturer with a Ph.D. is lower at an hourly rate than it was when you were still a graduate student, that is, you might make money if you're lucky enough to work more hours, but the pay-per-hour falls) but because they have special and unique skills they bring to the campus:

"We have people who are professional practitioners, who come in as lecturers and teach part-time: Lawyers, social workers. They teach composition courses; they teach classes in what we would call obscure languages."

I taught composition courses at Berdahl's school for more than six years. I was a graduate student when I did it. The vast majority of comp classes at Berkeley are taught by grad students; the ones that are not taught by grad students are mostly taught by people with doctorates who haven't gotten a full-time job. The latter is not a choice, for the most part, although Berdahl apparently thinks the world is full of people with $50,000 in unpaid student loans who want nothing more than to teach composition at his school for a coupla thousand dollars a course.

On the third floor of Campbell Hall, where my office currently resides (an office I share with three other non-tenure-track faculty members), there are faculty members in Mass Communications, American Studies, Religious Studies, Interdisciplinary Studies, Cognitive Science, and I'm probably forgetting a couple of others. All told there's more than a dozen faculty members on our floor, maybe closer to two dozen. One of them is a full-time, tenured professor; all of the rest of us are "adjunct faculty," lecturers or people on fellowships. I can think of one person amongst all those adjuncts who fits the description of us Berdahl is promoting, a psychologist who moonlights as a lecturer. And it's true that the lecturer life, when I have a job at least, suits me OK. But every other adjunct on my floor is working here because it's what the university offers, not because it's what they want from the university.

Dipshit Berdahl seems to think that people who raise legitimate questions about their work environment and/or the importance of treating instructors properly at a prestigious university are just disgruntled crybabies:

"In many cases these are... are people who had hoped for and expected to get or are waiting for tenure-track positions at universities. And so there is a certain frustration that is borne of their... of the status of their careers that they're at. And... and... and that obviously is reflected in some cases in their attitudes towards where they're working."

You see, it's not that the university treats me like shit. It's that I am too neurotic to accept my place on the totem pole. If I'd just realize that I suck, if I just understood that my paycheck reflects nothing more or less than that I am not as good as other people in my profession, then I'd overcome my bad attitude towards my employers.

This guy tells the world that I'm disgruntled because I don't accept his greatness, then has the gall to state of the relationship between university and lecturers:

"We try to make certain that their life isn't bad, and... and I hope that it isn't."

I'll bet if you look around the house, you'll see many wife-based memories. Robin loves her tea ... I'll bet she left a cup on the counter. Or what about the bathroom? We know she loves a relaxing bath, and God knows we've all given her a lifetime supply of bath stuff that must be around! Your house is filled with Robin ... not just her stuff, but her energy and love. You can't see her, but she's there.

so it's come to this

Robin's only been gone since Saturday. She won't be back for about 2 1/2 weeks. Yet I'm really stumbling around right now. Tonight I was sorting some laundry I'd done, and there were a couple of pair of Robin's underwear in the pile. I picked them up to put them in their drawer, and realized they were as close as I come these days to being with her. And I said to myself, "thank god for her underwear, or I'd really be freaking by now."

Since she isn't here, she's not creating any new dirty laundry for me. Eventually, I'll do a load that won't have any of her clothes in it. When that happens, will all my wife-based memories disappear?

i am a suspect

Well, here it is, the quote of the night, from our fearless leader's State of the Union address:

"All told, more than 3,000 suspected terrorists have been arrested in many countries. And many others have met a different fate. Put it this way: they're no longer a problem to the United States and our friends and allies." (emphasis added)

This got a standing ovation, of course. Why not stand up and cheer the announcement that suspects are being killed. It's the Dirty Harry system of justice: I killed you, therefore you are guilty. 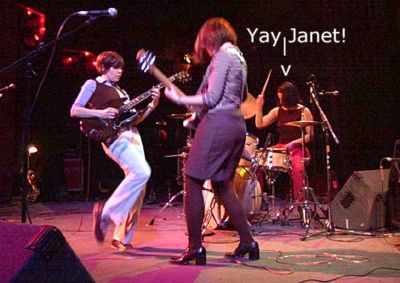 Sleater-Kinney once again! This makes our ninth S-K show (I think!) ... last time we saw them, in September, they sang a Bruce song! The above picture comes from a fine S-K fansite, One Beat, although I added the shout-out to Janet myself. (Hey Jillian, did you ever realize before that you and Janet were born the same month?)

Posted at 08:05 AM in Bruce Springsteen, Music, Sleater-Kinney | Permalink | Comments (0)

Bush's State of the Union speech.

So...I am in Italy now, and I didn't stay up and watch the Super Bowl. Given that I don't like American football (at least as played by professionals as opposed to flag football,) it was a no-brainer.

It's a very long flight from San Francisco to Naples. I had a layover in Frankfurt, and a short one in Munich (Munchen.) Those Germans aren't as organized as you're lead to believe. I was fortunate to have aisle seats, as Lufthansa doesn't seem to have any more room than any other airline. They DID manage to get me a vegan meal everyt time though! I ask for vegan to keep others safe from my lactose-intolerant insides. It meant that I got dinner and breakfast before anyone else.

I'm writing this from the library at the military base. I have my own ID card now. We're doing errands today...doctor a little later, lunch at Subway on bit ago.

Katie has a really big belly, but the rest of her looks about the same. The baby is giving her a bad time today, so we're hoping it comes soon. It looks like the name will be Ava Catherine, to be called Ava Cate. We'll see. It could change at the last minute. I was going to be Ruth Ann until I got here. Katie would have been Nick if she was a boy. I think Tami was going to Timothy.

Katie and John have a nice house, with a full basement that isn't really a basement, it's just on the same floor as the garage. I have a bedroom and bath there, but there are whole rooms down there in addition to mine. I took some pictures that I'll try and get sent off later. The only problem with the house is that the landlord doesn't take care of things well, so the windows leak and cause water damage, and yesterday the boiler leaked (thank gawd it's outside) and whined like a banshee when it ran out of water. There is a wonderful view of the bay from their house, and you can see islands and Vesuvius. I wouldn't mind going to Pompeii while I'm here, but we'll see. I've always been fascinated with the idea that people we're just doing what they did in those days, and that when the gases and ash came, people were just frozen in time.

The drivers here are pretty crazy...they aren't unlike drivers in the rest of Europe, except that they don't care where they are when they decide to change lanes. On the way here we were driving on a 3-lane road, that some folks would turn into 4 lanes, and a guy in the far left lane decided he needed to exit at the exit we were passing...it was quite a miraculous change of lanes. Nobody died, so I guess it worked out.

I'm going to go look at books now, so I have something to read before I go to sleep.

I don't think any regular readers of this blog (of which there are, what, five?) rooted for the Angels in the World Series. So the target of my rant was more general than specific. Having said that, the only thing I didn't like about the final 48-21 score was that the Raiders got 21 points. If there was gonna be 69 points scored in this game, I would have preferred that the Bucs got all 69 of them.

I don't actually know any real Raider fans. I guess I know a couple, but I mean know. I AM acquainted with more than one A's fan who rooted for the Angels, though, and I truly hope that every one of those people is also a Raider fan. Because I'm thinking of them tonight, and I hope they are miserable.

chris is not hateful

I don't claim to know for sure how many people read Steven's blog on a regular basis.... I know a few of us family members do, and a couple of his good friends, probably a few others we don't even know. But given the ones I do know who read this blog, I don't think one of them rooted for the Angels in the World Series.

That said, I was cheering for the Raiders today and was sorry to see them lose. But not nearly as sorry as I was to see the Angels beat the Giants in last season's World Series.