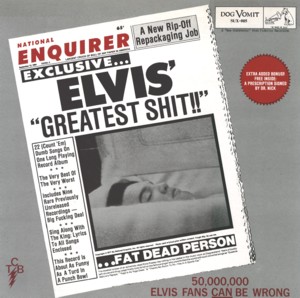 Ohmigod, I've found something even funnier than those Triumph the Insult Comic Dog things I linked to awhile ago. Elvis' Greatest Shit ranks with the all-time Elvis artifacts, and that means something, of course, because there's so much competition. It's a bootleg filled with really crappy songs from Elvis movies, along with alternate versions of a few good songs in, shall we say, lesser versions. Those of us who think of the King as a great artist NEED to hear this, to remind us all of what he was capable of. It's hard to say what is the most unsettling (it's all funny, that goes without saying, and the humor is cumulative, that is, each song in succession seems to increase the utterly surreal nature of these recordings). Which is harder to bear? The version of the beautiful "Are You Lonesome Tonight" where E slobbers his way through half-remembered lyrics, or the simple existence of an officially-released Elvis song called "Fort Lauderdale Chamber of Commerce"? Perhaps the "best" of this shit is "Dominic the Impotent Bull," which is indeed what the song is about.

The cover art is as infamous in Elvis bootleg circles as the album. There's the front cover, pictured above. There's the back, with ads for other Elvis albums ("The Shower Sessions" "Dead on Stage in Las Vegas," and the ever-popular "Vocal Duets" featuring the King singing with Dick Nixon). Not to forget the bonus replica of one of Dr. Nick's prescriptions for Elvis. This is a truly great package.