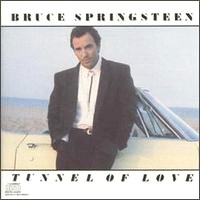 Tunnel of Love is arguably Bruce's last great album (too early to say with The Rising). Who would have thought that when he finally got around to making that Dylan album the new-Dylan folks had expected for 15 years, he'd offer his version of Planet Waves? "Wedding Song" from that album would be right at home in the Tunnel of Love:

Eye for eye and tooth for tooth, your love cuts like a knife,
My thoughts of you don't ever rest, they'd kill me if I lie,
I'd sacrifice the world for you and watch my senses die....
What's lost is lost, we can't regain what went down in the flood,
But happiness to me is you and I love you more than blood.

When he emerged in the early 70s, Bruce was thankfully an antidote to all that singer-songwriter crap stinking up the airwaves, but with Tunnel of Love, his songwriting took a turn towards a more personal style that, for one album at least, was poignant and appropriate. One sign of the personal nature of these songs is that Bruce rarely plays any of them in concert these days, as if the specific memories they inspire in him are things he'd rather forget. Ostensibly an homage to the great love he was sharing with his new wife Julianne Phillips, Tunnel of Love reeks with despair over love (never was a album dedication more ominously plain than this one: "Thanks Juli").The first single, "Brilliant Disguise," ends with this:

And it doesn't get much better elsewhere. The album closer, "Valentine's Day" (whoa, Bruce almost being ironic), features perhaps the most positive-sounding lyric on the record, and it's about a guy driving alone down the road, terrified that he's going to lose the love of his life.

For me, Tunnel of Love ranks with Bruce's greatest work. An appropriate companion piece would be the video for "Tougher Than the Rest," where Bruce and Patti seem to share more than vocals.