Home Archives Profile
bruce in '78, or, you wish you were there
dogtown and z-boys (stacy peralta, 2001) 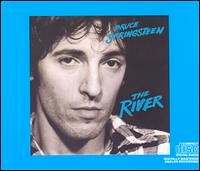 The first time I put The River (1980) on the turntable, I was a bit disappointed. The lead cut was "The Ties That Bind," a song we'd heard on the '78 tour, and it wasn't what I wanted. I really didn't know what I did want until the second song came on; it was "Sherry Darling," a goofy "frat rock" song with handclapping and general whooping around. We all grow up eventually, even Steven Rubio and Bruce Springsteen, but it always struck me as odd that someone with as much adolescent energy as Bruce Springsteen also always seemed older than his years. If he was 30 when he made The River, he sounded lots older on songs like "Point Blank" and lots younger on songs like "Sherry."

The River featured Bruce's first top-ten song, "Hungry Heart," and lots of extended seriousness (my fave was "Drive All Night," which lots of people didn't like ... didn't make sense that he'd drive all night "just to buy you some shoes"). But embedded within was the best collection of goofball Bruce ever in one record. "Sherry Darling," "Crush on You," "You Can Look (But You Better Not Touch)," "Cadillac Ranch," and even the generic "I'm a Rocker" and "Ramrod" would have made one of the greatest party albums of all time if they'd had their own disc. I often wished for just such a record, but Bruce never made it back in the day, and he sure isn't going to make it now. Of course, I can always produce a mix. In fact, here it is, the Bruce Springsteen Goofy Frat-Rockish Fun-Loving Party Mix:

Paradise by the C
Sherry Darling
Tenth Avenue Freeze-Out
Crush on You
Give the Girl a Kiss
Cadillac Ranch
Pink Cadillac
Part Man, Part Monkey
Lion's Den
Waitin' on a Sunny Day
Without You
Glory Days
Rosalita (Come Out Tonight)
Quarter to Three

It's entirely possible the above is as idiosyncratic a Bruce Mix as you'll find. I'm certain, at the least, that I have just listed some Bruce fan's least favorite songs (the coupling of "Part Man, Part Monkey" and "Lion's Den" is guaranteed to lead some fans to suicide, but not me!).