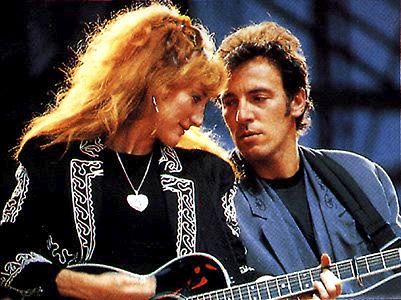 We've been lucky over the years to have attended some of the more famous Bruce shows ... Winterland '78, the first Bridge concert in 1986. We got lucky again on May 3, 1988, when we attended the show known to bootleg fans as "Roses and Broken Hearts." It was quite a crowd; besides Robin and I, we also had Geoff and Nikki, Chris and my earthquake buddy Laura, and even Neal and Sara, who we dragged along for their obligatory Bruce concert (they were 12 and 9 years old). We had general admission lawn seats at Shoreline, and so we got there early to stand in line and got to hear the soundcheck, which included "I'm So Lonesome I Could Cry" and Roy Orbison's "Crying." Coming on the heels of Tunnel of Love, it didn't sound like Bruce was too happy with his lovelife! What we didn't know is that apparently Bruce had only recently told Julianne that he was "seeing" singer Patti Scialfa. Most reports are that the shows improved immediately, so I guess we're lucky to have seen him post-confession.

Anyway, the first half of the show was ok, as he covered most of the new album, but when the band (which included the Miami Horns) came out after the intermission, something had changed. It was as if Bruce had decided, now that he'd done the new stuff that interested him, that he would plow through the classics one last time. It almost seemed like a sad concession on this first post-BitUSA tour, to go back to what he'd done so well in the past. But it wasn't sad for long, because from then on, Bruce and the E Street Band were inspired, better than I'd ever seen them before. They pulled out all the proverbial stops. They played "I'm a Coward" (when it comes to love) and "Part Man, Part Monkey," and "Light of Day" for the first time I'd seen it played. The encores were astounding, and beginning with the then-inevitable "Rosalita" ("the greatest love song I ever wrote") (although I didn't know it then, this would be the last time I ever saw him play it, my favorite of all Bruce songs), and then crushing through one oldie after another: "Have Love Will Travel," his own "10th Avenue Freeze-Out," "Sweet Soul Music," "Raise Your Hand" (Neal confessed some years later that his main memory of the night was that it was a good show, but he kept asking "is he done now?" and we kept saying "One more song! One more song!"), then "Little Latin Lupe Lu" for the first time in eleven years, and then, for the first time on this tour, "Twist and Shout" (and then yes, Neal, he was really done). It was the greatest bar band/garage band/r&b band music I ever heard, as if they were saying "see, we can still do this." They most certainly could do this ... and now, they are still my favorite bootleg tunes of all time.

We saw Bruce one more time that year, on his birthday as part of the Amnesty International tour. Joan Baez sang "Happy Birthday," the band played a solid but abbrieviated set, he played "Raise Your Hand" one last time ... and we wouldn't see him with the E Street Band again for eleven years. He doesn't play oldies at the end of his shows anymore ... I think he said once "I have my own oldies now." When he reunited with the E Streeters in '99, they were tighter and, yes, better than ever. But all things considered ... our increasing age and all that implies being perhaps most important ... it will never again be like it was then. And so as I type these words, I'm putting on the encores from Roses and Broken Hearts one more time.