it ain't no sin

I'm sorry, I know it's boring, but there's nothing else to talk about. Oh, I could mention that Robin, Sara and I just watched Re-Animator, but what I REALLY did today was 1) get up early to watch Bruce on the Today Show, and 2) go down and buy a legit copy of the new album, and 3) listen to Bruce all day long. And then Salon ran a wonderful autobiographical Bruce piece by Joey Sweeney, that finishes like this:


Bruce Springsteen is healing a nation. Not the Yeah Yeah Yeahs. Not Moby. Not even, since we are traveling in descending altitudes of coolness, the fucking Goo Goo Dolls. Bruce Springsteen is on the television -- every television -- and he is healing us. Because we have been hurt. And because Bruce Springsteen not only cares about America, he is America, and what's even better, he understands just how fucked up it is and has always been to be an American, the ridiculous mix of the grand and pathetic, the painfully self-aware and the mockworthy clueless spiritual state that has gotten us so far ahead and so sadly behind the rest of the world. Some sick mojo the man has is melting us on our couches, making us into puddles of microwave-popcorn butter and that nasty aloe shit they put on Kleenexes now. We are a tired, huddled mass, punch-drunk and lucky as fuck that it wasn't us. And as Bruce is so humbled to remind us, well, it wasn't us this time, at least. And hey, remember the mantra: It ain't no sin to be glad you're alive.

bruce story of the day

He's on the cover of Time again. The article tells a story about one Stacey Farrelly, whose "husband Joe was a fire fighter with Manhattan Engine Co. 4 and, as his obituaries noted, a lifelong Springsteen fan." Bruce talked to her on the phone after learning about her husband, and the stories she told about Joe were in Bruce's mind as he worked on The Rising. Farrelly is asked if she thinks Bruce is exploiting the tragedy:


Let me tell you, I have more CDs that people have sent me, just random people that wrote songs or whatever. I won't listen to them. But I trust that Bruce is sincere, that he really believes in what he wrote. I know the firemen are going to have a hard time with some of it, but then you sing along, and you just feel a little better. I trust him with all my heart. The only thing that bothered me is when he married Julianne.

look what else came! 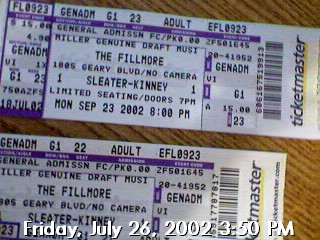 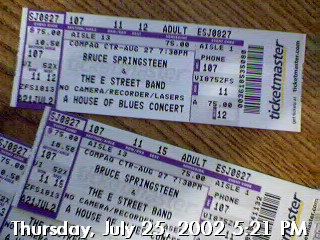 
1. premodernism: Original meaning is possessed by authority (for example, the Catholic Church). The individual is dominated by tradition.

2. modernism: The enlightenment-humanist rejection of tradition and authority in favour of reason and natural science. This is founded upon the assumption of the autonomous individual as the sole source of meaning and truth--the Cartesian cogito. Progress and novelty are valorized within a linear conception of history--a history of a "real" world that becomes increasingly real or objectified. One could view this as a Protestant mode of consciousness.

3. postmodernism: A rejection of the sovereign autonomous individual with an emphasis upon anarchic collective, anonymous experience. Collage, diversity, the mystically unrepresentable, Dionysian passion are the foci of attention. Most importantly we see the dissolution of distinctions, the merging of subject and object, self and other. This is a sarcastic playful parody of western modernity and the "John Wayne" individual and a radical, anarchist rejection of all attempts to define, reify or re-present the human subject.
Don't fear, this is still a post about Bruce Springsteen. Back in '92, we saw Bruce with that Other Band he had for awhile. After the show, our friend Kim Nicolini said of Bruce, "he's such a ...." Your job is to figure out which of the above filled in the blank in Kim's statement: premodernist, modernist, or postmodernist.

Most important, though, is the rejection not only of problematic aspects of the Western science tradition, but of important and vital aspects of that tradition. In particular, the frequent absence of systematic analysis such as double-blind testing means that far too many alt-health claims are rooted in the anecdotal and the unverifiable. That some people are susceptible to vague claims is understood; that people concerned about their health might be particularly willing to believe that something might improve their lives is also understood. What is hard to understand, though, is why anyone (including leftist cultural critics) who is ready to attack complex social problems with critical thinking strategies, would turn their brains off when it came to the relative merits of aromatherapy versus a visit to the doctor for a drug prescription. We are back to our old saw: the Age of Reason and the glorification of Science and Progress is so clearly problematic that the absence of concrete scientific data regarding the value of something like aromatherapy is seen as a positive. Aromatherapy proves it is the enemy of Science (my supposed enemy) by existing outside Science, which makes aromatherapy my friend. That this is nonsense is only part of the story. What is especially sad is how often this means that otherwise intelligent people risk their very lives in the service of "alternative" health notions. -- Steven Rubio, "Dirty Laundry"

Yes, it's come to this: I'm quoting myself in my blog.

I guess I should say hi to my students in Mass Comm 10, who may be stopping by here.

all bruce all the time 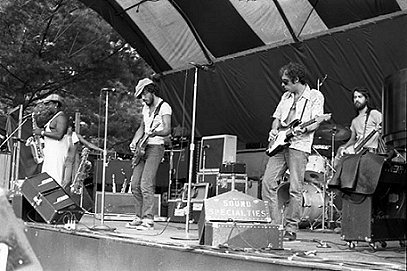 The above may include a rare (as in I've never seen one before) picture of Steven Van Zandt without a hat. (His Sopranos' toupee doesn't count.) Anyone think that guy on the right playing guitar is anyone but Miami Steve/Little Steven?

Well, this may be the most astounding example yet of the influence of ... but I'm getting ahead of myself.

The Center for Strategic & International Studies is "dedicated to providing world leaders with strategic insights on - and policy solutions to - current and emerging global issues. CSIS is led by John J. Hamre, formerly deputy secretary of defense, who has been president and CEO since April 2000. It is guided by a board of trustees chaired by former senator Sam Nunn and consisting of prominent individuals from both the public and private sectors." Sounds pretty fancy and important, doesn't it? Well, here's an excerpt from a 42-page report on biological warfare by Anthony H. Cordesman:


The US must plan its Homeland defense policies and programs for a future in which there is no way to predict the weapon that will be used or the method chosen to deliver a weapon which can range from a small suicide attack by an American citizen to the covert delivery of a nuclear weapon by a foreign state. There is no reason the US should assume that some convenient Gaussian curve or standard deviation, will make small or medium level attacks a higher priority over time than more lethal forms.
Any structured intellectual approach to describing this situation - and planning for it -- is so uncertain that a valid structure can only be developed as an exercise in complexity or "chaos" theory. I, however, would like you to think about the biological threat in more mundane terms. I am going to suggest that you think about biological warfare in terms of a TV show called "Buffy the Vampire Slayer," that you think about the world of biological weapons in terms of the "Buffy Paradigm," and that you think about many of the problems in the proposed solutions as part of the "Buffy Syndrome." 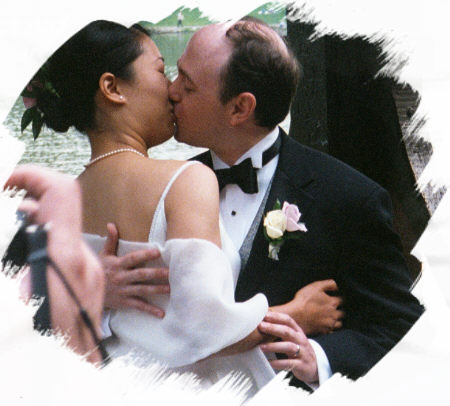 From our trip to New York City a couple of months ago.